This is my third contribution to fellow blogger Jane Dougherty’s challenge to write a post each day. I decided to come up with one story in five parts. It is an English translation of a Dutch story which was published earlier on this site. 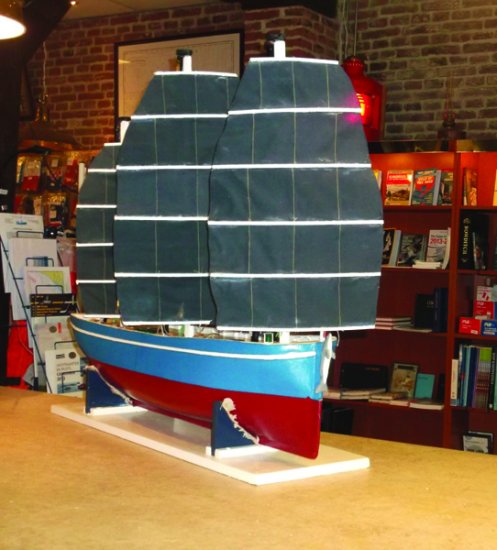 “Ladies! Soyez les bienvenues! Come on in! Had a nice trip? Can I get you a cuppa?”
Ron de Vos invited the two ladies into his office which was dominated by a large-scale ship model. Their admiring looks caressed the sleek hull lines, then climbed aloft along the revolutionary Dyna rig consisting of square sails attached to tripod masts.
“Yes, that’s her!” Ron explained when he returned with the refreshments, “Windship 1. Like her?”
“She doesn’t have any jibs,” the CEO said with a critical look. “What about the upwind performance?”
“The length of a jib boom,” Ron explained patiently, “has been ïntegrated into the bow to lengthen the relative waterline. This improves sailing performance. Besides, it makes the hull capacity relatively bigger, which is interesting from an economic point of view.”
“Very interesting indeed!” the CEO nodded enthousiastically.
“One more thing,” the secretary said. “Our client is very demanding about protection against piracy, but a merchant ship is not allowed to carry arms. How can we solve that problem?”
“Just leave it all to me,” Ron giggled, “we don’t call it a Windship for nothing!” He checked if the office door was closed, and in a conspiratory tone explained to the ladies what appeared to be the most innovative details of the Windship design…