“A peaceful evening, commandeur.”
“So it is, captain. Let us hope and pray it is a good sign for the long way ahead.”
“Oh, I am sure the Lord is on our side. The good reverend was all too certain about it in his sermon last night.”
“Very well then, I trust he knows. Now I want to catch up on my sleep.”
“Have a good night’s rest, commandeur. Mate, listen up, please. It seems to me that all is well, but the tide is running; besides, these waters are notorious for piracy and smuggling. I do not wish to lose a brand new vessel so I trust you call me if there is any change.”
“With God’s help you can rely on me, skipper. Good night.”

The Western sky is in flames as East Indiaman Batavia negotiates the tidal streams around the Isle of Wight before a light but steady Easterly breeze. A few hours earlier, an English fisherman cutter was left astern without any sign of animosity so there is not a person on board who suspects any misfortune.
On the orlop deck, however, there is definitely something going on. Between stacks of cargo dozens of tiny feet tripple around in no particular direction, while little voices squeak in an excited manner.
“Allright, listen up everybody!”
From a cask of brandy one of the rats addresses a crowd of fellow rats, some of them still wiping sleep out of their eyes. They collectively stop their squeaking conversations.
“This ship is in great danger. I come from Stonehenge, a sacred place a few Dutch miles up the Channel coast, where I attended a meeting of holy men or druids. One of them claimed he had seen a sign in the stars which he could not understand. So they all went on to study the phenomenon carefully and came up with some kind of prediction, saying, I quote: ‘The Rats Are Leaving The Sinking Ship’, unquote.”
Only just now dozens of pairs of little eyes really open up, looking like as many glow worms as the squeaking starts again. The speaker resumes:
“Being a local, I have learned to take these druid predictions seriously. So as soon as I heard this ship was entering the Channel, I knew I had to do something. I want you all to follow me, leave this doomed vessel, and swim for your lives. Any questions?”
“I can’t swim!” a little voice cries out.
“Oh, yes, erm, well… those of you who can’t swim, or are afraid of water, they will have to cling to others who can swim, or else wait for the druids to come up with a solution. Anyone else?”
Deep silence spreads over the bewildered crowd, until one of them shouts: “Wait a minute! I think I got an idea!”
“Speak up!“
“There’s a long rope hanging from the ship’s galleon, that’s of no use at all. Why don’t we nibble it off and take it with us so those who can’t swim have something to hold on to?”
“Splendid! What a great idea! Hurry up folks, let’s go!”
Hardly visible in the dusk, Batavia’s galleon swarms with rats dodging bow wave showers as they anxiously try to cut off the rope which seems useless, but actually serves as toilet paper. Eventually, when it only hangs by a single thread, a few rats reluctantly climb down from it while others urge them on not to be afraid and just hold on.
“Okay!” the rescue leader squeaks, “Let’s go!” and with a last bite cuts through the final fibre. A loud peep soars into the night, whereupon a cascade of rats streams down into the Channel waves.
Just then, the cook’s mate empties a waste bin from Batavia’s half deck. “Look!” he points out, “The rats are leaving the, erm, sinking ship!”
“Hold your tongue, you!” the cook shouts back, “Speak no evil! I’d rather you clean up the galley, and quick!”

“Are we there yet?”
A little rat clings to the rope that tends to follow every ripple in the water. His mom and dad swim on either side trying to keep it as steady as possible. “Just sit… pff… still!” daddy gasps, gulping sea water every now and then, “mummy and I won’t let you go!” They both realize only too well there is no turning back: Batavia has vanished in the night. Way up ahead, occasionally obscured by the swell, a faint light is their only hope of survival.
“We are the rats that swim to the shore,” a loud squeak shouts out from the back, “Won’t go to sea for ever more!”
Apparently, this moral support boosts motivation: everyone joins in the chorus. Their paws splash the salt water simultaneously to the beat of the improvisation, substantially speeding up their progress. Luckily, the tide is in so they keep closing in on the light on the horizon. “Carry on!” the rescue leader calls, “Victory will soon be ours!”
“Who cares about victory?” someone replies, “I’d settle for dry feet!”
“Watch out!” another one cries out, whereupon the first surf wave picks up the entire pack. As it roars by, the little rat is washed off his place on the rope, but he is rapidly put back on by his mum and dad.
In the meantime, a full moon has risen. Shivering from cold and wetness the rats cling together on the little rocky beach they eventually are washed upon, where the rescue leader finds to his satisfaction that every rat has survived the Channel crossing.
“Allright, listen up everyone!” he calls, “As you can see, there’s a full moon tonight, so I expect the druids will all be at Stonehenge to celebrate. I can think of no safer place to stay so why don’t we join them?”
“I’m all wet!” someone mutters, “Anyone got a warm towel, please?”
“Oh, come on!” the rescue leader replies, “Shake it off, will you? A little walk will do you good.” He leads the pack up the hills, where they all soon disappear into the thorny undergrowth.

“What can you make of it, master?”
Running his hand through his long white beard, the old druid looks up to the grinning moon. Immobile as a statue, he murmurs inaudibly while counting his fingers. “Odd…” he whispers, “very odd indeed…”
Knowing when not to disturb his master’s magical mathematics, the student leans against a giant monolyte reflecting the light of the night. More druids gather in small groups, quietly discussing the strange omen in the heavens that seems to predict both fortune and misfortune: Orion’s Sword is almost doubled in length by the Red Planet; on the other hand Lyra’s main star touches the horizon.
Awaiting his master’s lesson the student reaches under his gown and produces a recorder. Improvising a tune he is quickly enchanted by its haunting melody. He gets up and starts to dance, a little shaky yet elegantly by his standards. One after the other the druids look up at him, surprised as well as amused; they form circles and dance around with swirling gowns.
The flautist gets more and more carried away. His fingers dance up and down the fragile instrument, ornamenting the melody by more and more complex riffs soaring into the night like fireworks. Meanwhile, the druids’ dance gets more and more acrobatic when they jump high and swirl around the ancient monument’s immobile standing stones.
There is also something going on in the long grass. None of the dancers notices the swarming crowd of small creatures, also enchanted by music. Forming circles and lines they harmonizingly squeak along with the student’s flute. Not dancing any longer, he leans against the tallest of the standing stones.
The full moon smiles looking down on the scene, but claws of black clouds reach for its round face. The wind starts to whisper in the bushes, rain falls down but the tireless dance continues, getting wilder still. Gusts of wind hum around the stones of Stonehenge accompanying the flute and rat song like an organ. The druids’ flapping gowns are torn to rags, their beards lashing their faces.
Unaffected by the raging elements, the flautist plays his instrument by one hand, the other conducting to an impossible beat. Completely absorbed by his music his looks gradually change as he grows whiskers on either side of a long snout, his grin showing two incisors of unusual size. He crouches, crawling around he leads the rat and druid procession away from Stonehenge, towards the coast.

The English fisherman cutter is desperately trying to come back into port. The ebb tide seems stronger than ever, the wind coming from all directions. The small crew strains the sheets and halyards, the helmsman almost breaks the tiller. Heavy squalls chase each other, every now and then a ray of moonlight peeks through the pitch-dark night…
Suddenly, the skipper, anxiously peering into nothingness in search of a landfall, observes a faint glow depicting the ominous figure of a giant creature, its arms stretched above a rat-like head while wading directly towards the distressed vessel.
The storm builds, the rigging screams in a polyphonic way, accompanying cacophonic flute flashes dashing madly through the sky. The sailors cannot help watching the monster approaching as it towers above their little cutter, its rat head depicted against the faint moonlight.
One last scream shakes the thundering skies as the wide-open-beaked creature tips over and crashes, taking the boat down into the deep of the Channel in its fatal fall…

Next morning, the storm blown out, dozens of white gowns are washed ashore upon several beaches along the Channel coast.

5 thoughts on “The Channel Rat” 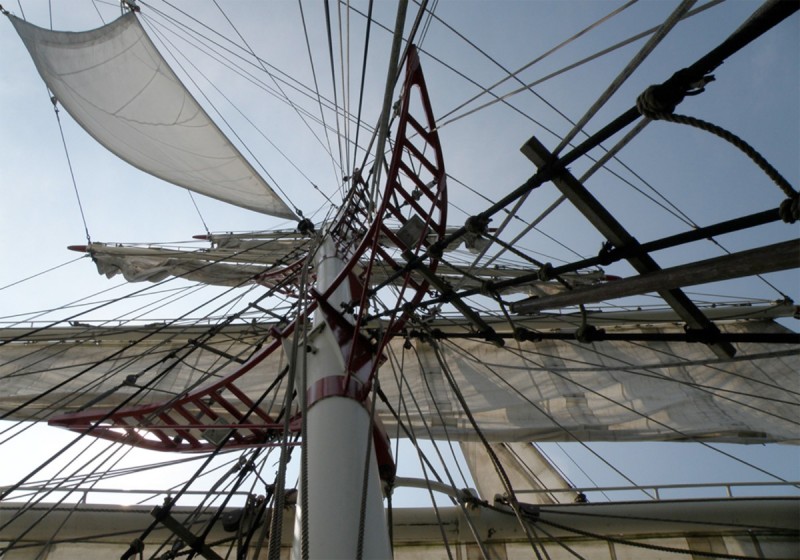